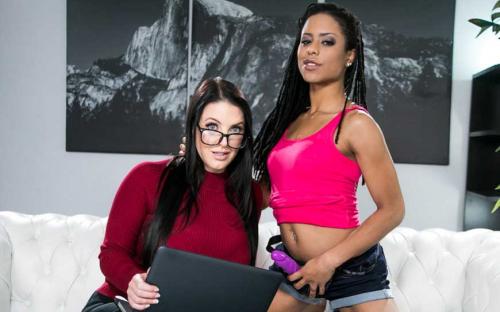 Angela's about to post her latest critique, her fingers flying across the keyboard of her laptop, when there's a knock on the door. Nothing could prepare her for seeing that it's none other than Kira herself!

Angela can barely string more than two words together as Kira, who is on a mission, invites herself in. She's entranced by Kira, even as she's told off for being so nasty on forums. Apparently, Angela has no idea how hard it is to do the work Kira does! So now Kira wants Angela to go back and fix ALL the mean things she's ever said. Angela snaps out of her starstruck haze long enough to cheekily ask what will happen if she DOESN'T? The answer becomes obvious when Kira raises a brow and whips out her bright purple strap-on.

Flustered, Angela gets straight to work altering her past comments. Yet, she can't help but to stubbornly voice her opinions with Kira chastising her the entire time. Gradually, Kira inches closer and begins seducing Angela instead, which leaves the critic weak in the knees. Since Angela LOVES commenting on her performance, maybe she'd love to experience the real deal for herself?