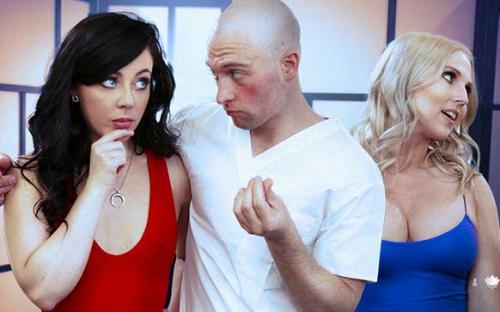 Description: Whitney Wright and Zac Wild, two massage therapists and coworkers, are relaxing before their next appointments. When Whitney mentions that it's none other than Christie Stevens, Zac is over the moon. He has a HUGE crush on Christie and wishes he could get with her. Meanwhile, Whitney shoots him down since he KNOWS Christie is a gold-star lesbian, right? As if Christie would ever get with Zac! Whitney, a lesbian herself, hasn't even gotten with Christie!

Zac suddenly has a stroke of genius. He's convinced that he can turn Christie straight with mind-blowing sex. He just needs Whitney's help... Whitney's not interested until Zac bets his paycheck. 'You're on!' she declares as they seal the deal with Zac letting her in on his plan...

A short while later, Whitney leads Christie to the massage table. She takes her sweet time massaging Christie, making she she's nice and relaxed. When Christie starts to really enjoy her massage, Whitney dives in with a special touch.
Download
May 22, 2019
PornRapidgator.com